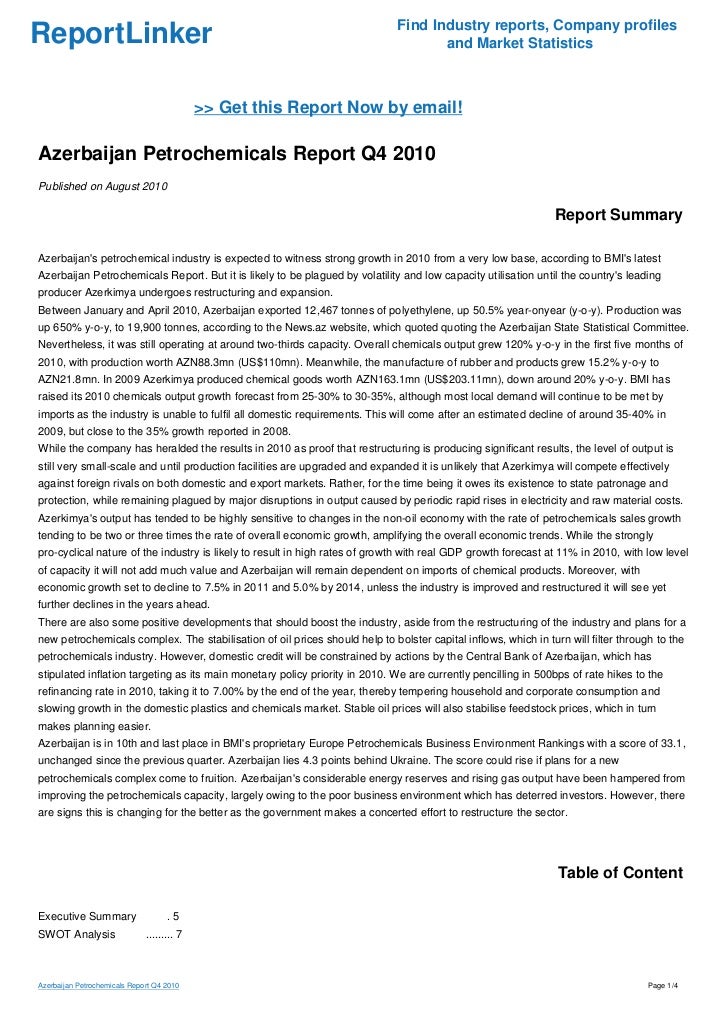 Azerbaijan's petrochemical industry is expected to witness strong growth in 2010 from a very low base, according to BMI's latest Azerbaijan Petrochemicals Report. But it is likely to be plagued by volatility and low capacity utilisation until the country's leading producer Azerkimya undergoes restructuring and expansion. Between January and April 2010, Azerbaijan exported 12,467 tonnes of polyethylene, up 50.5% year-onyear (y-o-y). Production was up 650% y-o-y, to 19,900 tonnes, according to the News.az website, which quoted quoting the Azerbaijan State Statistical Committee. Nevertheless, it was still operating at around two-thirds capacity. Overall chemicals output grew 120% y-o-y in the first five months of 2010, with production worth AZN88.3mn (US$110mn). Meanwhile, the manufacture of rubber and products grew 15.2% y-o-y to AZN21.8mn. In 2009 Azerkimya produced chemical goods worth AZN163.1mn (US$203.11mn), down around 20% y-o-y. BMI has raised its 2010 chemicals output growth forecast from 25-30% to 30-35%, although most local demand will continue to be met by imports as the industry is unable to fulfil all domestic requirements. This will come after an estimated decline of around 35-40% in 2009, but close to the 35% growth reported in 2008. While the company has heralded the results in 2010 as proof that restructuring is producing significant results, the level of output is still very small-scale and until production facilities are upgraded and expanded it is unlikely that Azerkimya will compete effectively against foreign rivals on both domestic and export markets. Rather, for the time being it owes its existence to state patronage and protection, while remaining plagued by major disruptions in output caused by periodic rapid rises in electricity and raw material costs. Azerkimya's output has tended to be highly sensitive to changes in the non-oil economy with the rate of petrochemicals sales growth tending to be two or three times the rate of overall economic growth, amplifying the overall economic trends. While the strongly pro-cyclical nature of the industry is likely to result in high rates of growth with real GDP growth forecast at 11% in 2010, with low level of capacity it will not add much value and Azerbaijan will remain dependent on imports of chemical products. Moreover, with economic growth set to decline to 7.5% in 2011 and 5.0% by 2014, unless the industry is improved and restructured it will see yet further declines in the years ahead. There are also some positive developments that should boost the industry, aside from the restructuring of the industry and plans for a new petrochemicals complex. The stabilisation of oil prices should help to bolster capital inflows, which in turn will filter through to the petrochemicals industry. However, domestic credit will be constrained by actions by the Central Bank of Azerbaijan, which has stipulated inflation targeting as its main monetary policy priority in 2010. We are currently pencilling in 500bps of rate hikes to the refinancing rate in 2010, taking it to 7.00% by the end of the year, thereby tempering household and corporate consumption and slowing growth in the domestic plastics and chemicals market. Stable oil prices will also stabilise feedstock prices, which in turn makes planning easier. Azerbaijan is in 10th and last place in BMI's proprietary Europe Petrochemicals Business Environment Rankings with a score of 33.1, unchanged since the previous quarter. Azerbaijan lies 4.3 points behind Ukraine. The score could rise if plans for a new petrochemicals complex come to fruition. Azerbaijan's considerable energy reserves and rising gas output have been hampered from improving the petrochemicals capacity, largely owing to the poor business environment which has deterred investors. However, there are signs this is changing for the better as the government makes a concerted effort to restructure the sector.