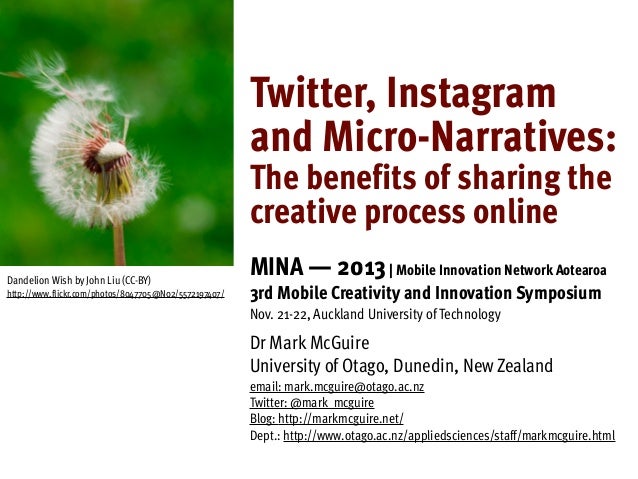 As Rainie and Wellman explain in Networked (2012) the rise of the Internet, social networks and mobile technologies have resulted in media experiences that are personal, multiuser, multitasking and multithreaded. They refer to this new social operating system as “networked individualism”. In Spreadable Media (2013), Jenkins et al. argue that our networked culture is characterized by instantaneous, informal communication through multiple channels in which the audience participates in the creation of value and meaning, and in the circulation of media and messages. In this paper, I use the concepts of networked individualism and spreadable media in an examination of projects that use Twitter and Instagram to create and share micro-narratives.

In 140 Illustrated Haikus, an iPhone and Instagram were used to document a month-long trip to three countries in late 2012. The resulting photos and short texts were published simultaneously via Instagram, Twitter, Facebook, Flickr, email and Tumblr (http://marksjourney.tumblr.com/). In addition to the limitations imposed by time and technology, captions for the photos were written on the spot in the form of a haiku. These constraints were found to help, rather than hinder, the creative process.

Austin Kleon is a writer and artist who creates “Newspaper Blackout Poetry” by selecting a newspaper, choosing a few key words, and blacking out the rest with a marker. He shares the results with more than 28,000 followers on Twitter (@austinkleon), many of whom tweet their own blackout poems. Kleon also posts his poems to a website (http://newspaperblackout.com/), where others are encouraged to contribute their own efforts. An advocate of sharing work-in-progress, Kleon’s approach exemplifies the process-based, conversational nature of networked creative practice.

Desert Friends, the “World’s First Instagram TV Show” is about three individuals who are transported to a distant galaxy and try to find their way back to Palm Springs (http://instagram.com/desertfriends). The filmmakers uploaded the first installment on 23 June 2013, and have continued to publish about four 15-second “shows” each week. Shot in black and white using the Instagram App on an iPhone, the programs emulate the style of low budget science fiction movies of the 1950s and 1960s. By episode number 63, the Desert Friends Instagram stream had attracted over 25,000 followers. This production demonstrates that filmmakers can create their own “TV show” with their own gear, and broadcast it over channels that anyone can use.

These case studies show that, by regularly sharing ideas and processes as well as outcomes online, individuals become part of a creative ecology that enables visibility, mutual support, collaboration, and better work.